The Snoezelen Room is a unique therapeutic medium which provides a non threatening environment designed to give a multi-sensory experience. Designed in Holland by Ad Verheul in the 1970’s with the purpose to treat children with disabilities such as Down’s Syndrome, autism and sensory problems, the Snoezelen Room has proved effective in treating a variety of problems. The feeling of safety and security experienced in the Snoezelen Room enhances therapy for many types of problems. The effects created by the sensory stimuli of music, light, gentle vibrations, tactile sensations and aromas can effectively improve motor and cognitive abilities, as well as emotional and social skills. 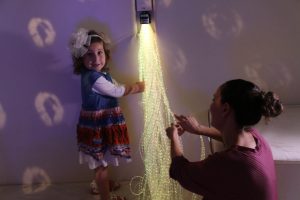 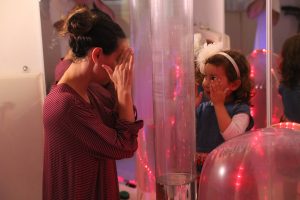 Treating trauma, especially after terrorist attacks and in the wake of the Second Lebanon War, evolved here at Arugot to help alleviate the symptoms of PTSD that affected so many of Israel’s citizens in the North. The scope of therapy for trauma victims here at Arugot has extended its reach to include women in crisis, victims of car accidents, women suffering from post partum depression, cancer patients and their families.

Dr. Gail Suskin, who runs the unit, is  a trauma therapist and innovator of this type of therapy. She also has a BA in Psychology and an MA degree in Women’s Studies. She received her certification in trauma therapy at the Israel Institute for Psycho-trauma and is part of the Beit Issie Shapiro team who runs courses on Snoezelen Room Therapy. In March, 2008 Gail represented the Haifa Center at the 6th International Snoezelen ISNA Symposium which was held in Germany where she presented her techniques. In January 2010, Gail ran a well-attended workshop at the Nefesh Israel Convention in Jerusalem called “When Motion meets E-Motion” which generated much interest. Her doctoral thesis researched the emotional well being of Israeli women, using a Dance/Movement Model.

Please fill in: Earmarked Arugot, so that the donation will reach us.